How Black is King Impacted the Next Generation of Creators

Ever since the colonization of the continent of Africa, the lives of Black people across the world have been subject to cruel and unusual punishment. Across global media, Africa and the diaspora have been perceived as poverty-stricken communities filled with scavengers, but this film highlights the beauty of the motherland.

With Black creatives continuously being turned away due to their appearance, culture, and beautiful differences, Black Is King showcases the work of melanated artists. This film will alter the future of Black creatives across the globe and how the world reacts to Blackness.

“The world will always tell you that you’re something else, that you’re too dark, too short, whatever. We need to show Black men and women are emotional, are strong, are smart, intuitive.”

It is well known that one cannot be what one cannot see. Black people are among the most underrepresented ethnic groups in every industry, especially in entertainment and media. Throughout Black Is King, Afrocentric beauty appears to be the norm and is unapologetically celebrated. It is obvious that Beyoncé made it her mission to create divine images of Black people that can be widely consumed. For centuries Black people have been depicted as poor, lazy, and intelligent, but in this film, we are broadcast as kings and queens.

“We have always been wonderful. I see us reflected in the world’s most heavenly things. Black is king. We were beauty before they knew what beauty was.”

When you look at films, TV shows, or novels that portray Black people, you will find that the world perceives us as having a monolithic identity. Modern Blackness is often portrayed using struggle, violence, and criminality as the dialogue; meanwhile, our heritage is not depicted before slavery. With Black Is King reclaiming the greatness of Black people, it has the power to shift the perception through which other cultures view us. Black people are diverse in genetics, upbringing, and thought, so the stories that highlight us should be as well.

In a world full of racism, where being Black makes many doubt their capabilities, talent, and beauty, Black Is King dismantles the notions and doubts that brainwashed us. With a predominantly Black cast and crew, Beyoncé dominates the conversation around Black driven storytelling. It is extremely common for non-Black people to curate and develop Black stories, which removes the attachment, truth, and genuineness from the chronicles. Moving forward, major studios and networks will see the power of the Black voice and Black dollar which will increase the opportunities for US to tell OUR stories.

“Let Black be synonymous with glory.” 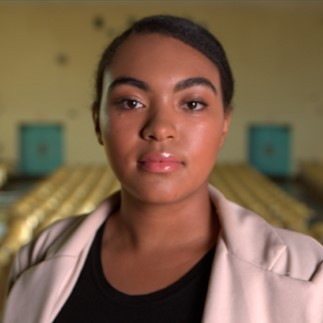 Desjah Altvater
Desjah graduated from Syracuse University in 2021 with a B.S. in Communication & Rhetorical Studies. She is now working for the Live Action Original Series at The Walt Disney Company.
Want in on CLLCTVE?
Join the Waitlist
Thank you! Your submission has been received!
Oops! Something went wrong while submitting the form.
×